Solju: "We want to encourage people to be who they truly are" 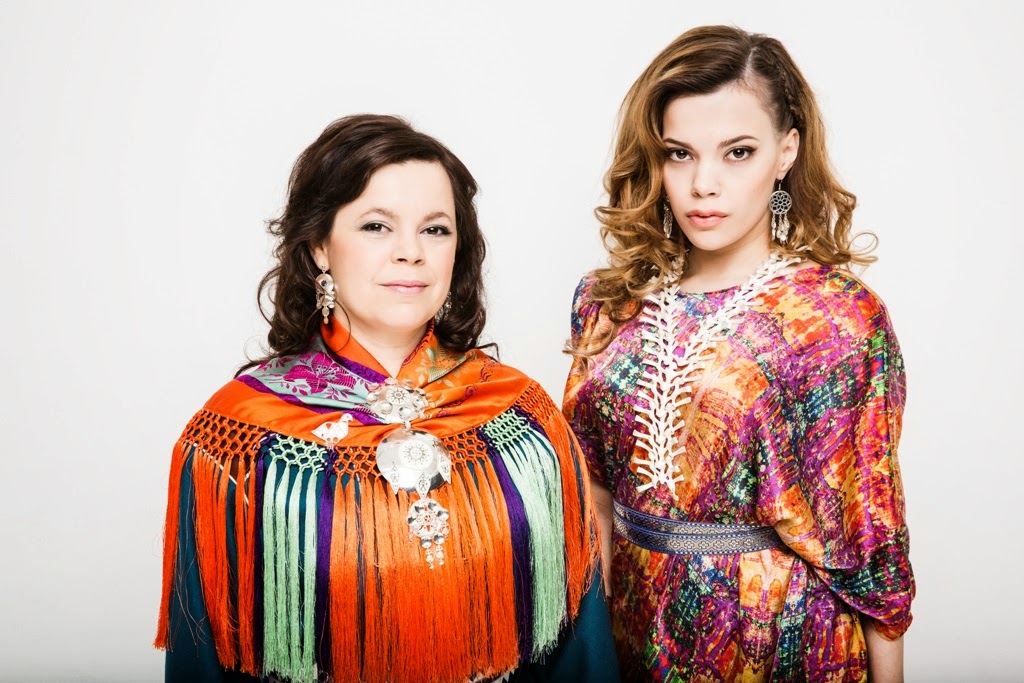 Photo: Anton Sucksdorff! (YLE)
Now we are going to Finland for the 10th UMK interview. Here are the answers of SOLJU:
Name: Hilda Birget Länsman
Age: 21 years
Height: Pocket size
Favorite color: Turquoise and indigo
Favourite food: Salad and sushi
Eye color: chocolate brown
Where are you right now? Im sitting on a cozy sofa and wearing a warm woolen shirt.
What’s your strangest talent? I'm not sure about the strangeness, but I can yoik and herd reindeer.
Home alone and you're bored. What do you do? Put music on and start dancing
What is the strangest thing you have in your room? Merja Aletta Ranttilas special paintings.
What are you really good at? Being modest
What are you really bad at? I'm bad at letting the man lead when I'm dancing.
Childhood idol: When I was six year old I admired Warrior princess Xena from TVseries
Childhood memory: When I was a child my favorite game was to run around like a reindeer and my dad would catch me with a lasso.
Favorite movie: The Lord of the Rings
Favorite TV series: Frasier
Tell me something no one knows about you: Im trying to make gangsta rap lyrics for my littlebrother and in my chilhood my favourite delicacy was cooked reindeer eye.
What would you do if you were invisible? Help a magician in his/her work.
Tell me a super power you wish you had: I wish I had full access to the capacity of my own mind and have full control of it.
What is your guilty pleasure? Chocolate
Name a song that never fails to make you happy: I love yoiking a yoik called Šuvvi Ljat by a band called Adjagas.
When did you start singing? I made my first yoik of the moon when I was three years old.
Can you teach me some interesting words in finnish? Suola means salt in finnish, but suola in sámi language means a thief.

Name: Ulla Pirttijärvi-Länsman
Age: 43
Height: short
Favorite color: Blue and turquoise
Favourite food: Sushi and foods made of reindeer
Eye color: brown
Where are you right now? At Home in Utsjoki making a traditional costume called gákti.
What’s your strangest talent? Cutting hair without education for it.
Home alone and you're bored. What do you do? Make handicrafts
What is the strangest thing you have in your room? A branch chair.
What are you really good at? Traditional sámi handicrafts and yoiking.
What are you really bad at? Driving a car in a city.
Childhood idol: Carola Häggkvist
Childhood memory: When I was 5 years old I used to change clothes often. My grandfather wondered what I might become when I grow older because I appeared in so many outfits in one day.
Favorite movie: The Lord of the Rings
Favorite TV series: Frasier and Spanish drama series Gran hotel
What would you do if you were invisible? I would travel.
Tell me a super power you wish you had: That I could turn war to peace.
What is your guilty pleasure? Sushi and chocolate
Name a song that never fails to make you happy: Baden Baden - Chisu
When did you start singing? When I was 9 years old I started singing and yoiking in a childrens singing group.
Can you teach me some interesting words in finnish? In Finnish: Hyvää päivää! and Sámi: Buorre beaivvi! means good day! 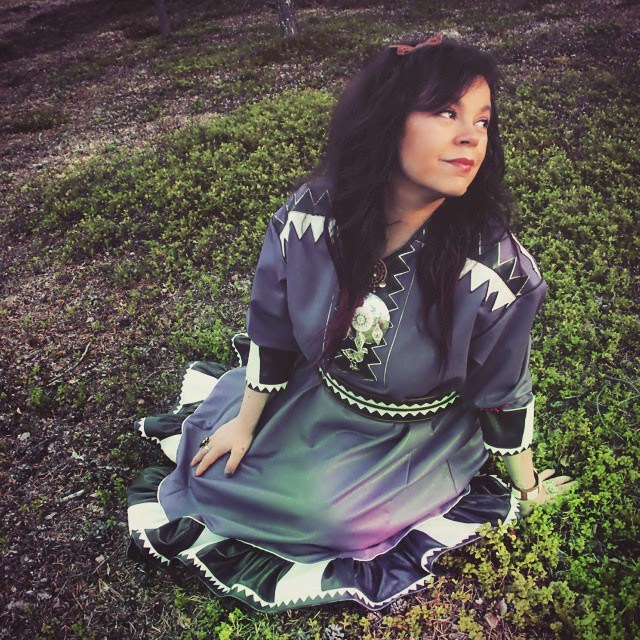 Hello girls! UMK is getting closer, how do you feel right now?
We are getting more and more exited of our coming live performance at the UMK.

How would you describe yourself as an artist?
We bring a breath of north and ethnicity through our performance. Ulla makes traditional and modern yoik music. Hilda is a fresh beginner with music and she is still finding her musical path. 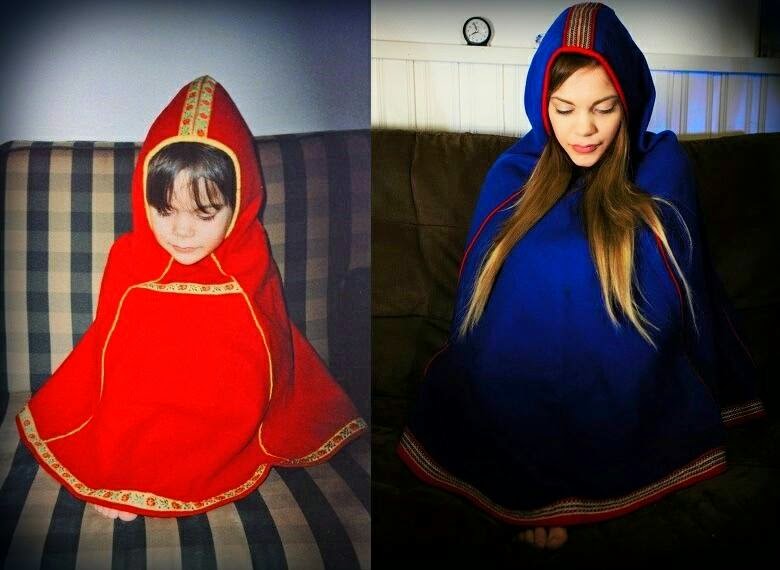 You are one of the participants of UMK 2015, how did it all begin?
Solju was formed in summer of 2014. At the same time we started our musical cooperation with Swedish musicians Ylva Persson and Linda Persson. So we took part in this fine opportunity to apply for the UMK. 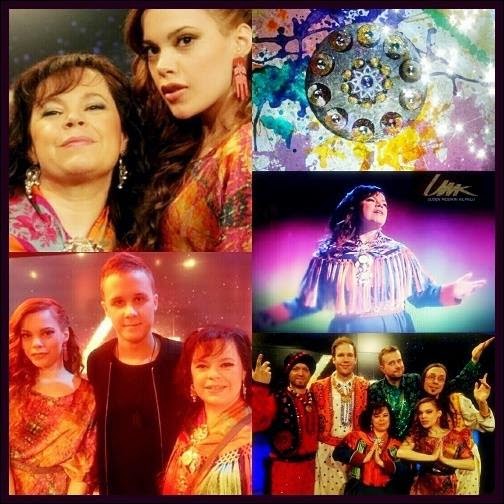 "Hold Your Colours" is the title of your song and its written by one of you (Ulla), Ylva Persson and Linda Persson. How was it working with them?
We went to Stockholm Sweden in the early winter to record our vocals, and it was very nice to meet these lovely, effective and independent twin-sisters after all the work we did together through internet. They made all the song arrangements, recordings and singing by them selves at their home studio. We got to spent time with their families and to see their beautiful self made music video. These women showed a great perseverance so-called SISU in their music work as they have successfully competed as composers, producers and backing vocalists in national Eurovision Song Contest finals during 2013-2015 with 11 songs in Finland, Cyprus, Malta, Ukraine, Belarus, Lithuania and Moldova. 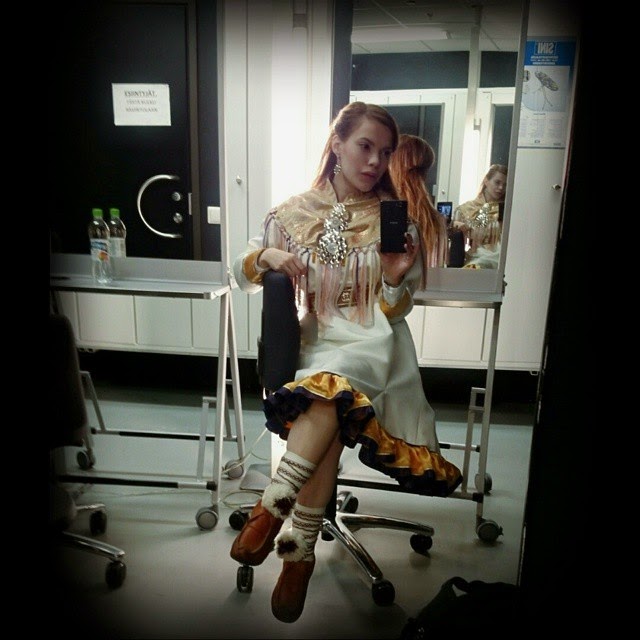 Whats the story behind the song?
Our experience of this song is that you can be proud of your culture. We want to encourage people to be who they truly are and let it shine. We get a lot of pressure from surroundings to blend in. Lets hold on to our colours and diversity. The world and people are beautiful with their differences. 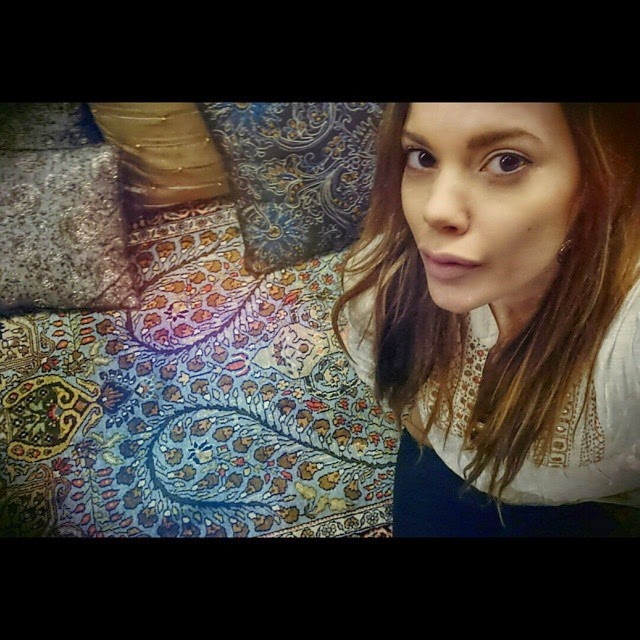 What can we expect to see on stage for the performance?
We want to give our audience good vibrations and a feeling of the north.

Do you already know what you are going to wear for the semifinal? any hint?
Something old, something new, something borrowed, something blue.

Tell me about the official video of "Hold your colours":
It was a bit hectic because it was Hildas first time at a filming studio in front of big cameras and she also had a cold and a fever.
Have you heard any of the other participants? any favorite?
From UMK15 Hilda likes Hans On The Bass and Eeverest and Ulla likes Satin Circus, Eeverest and Vilikasper Kanth. We can't say which one is the best. 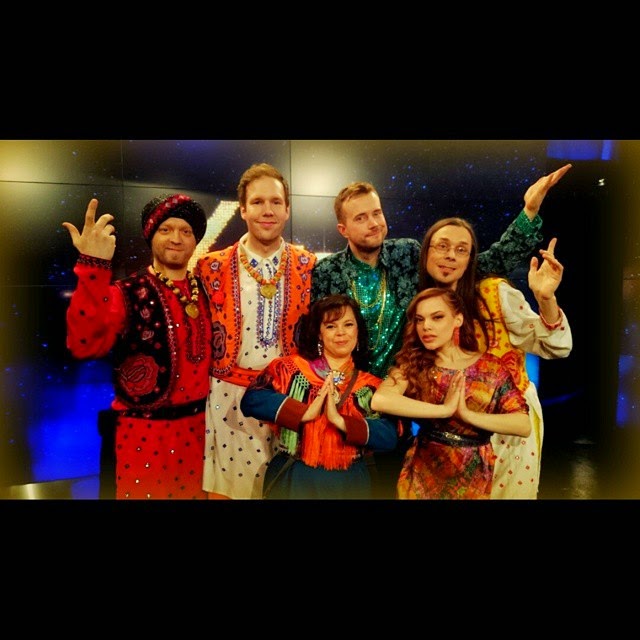 Did you watch Eurovision 2014? who was your favorite?
It's hard to say there was so many different kind of songs. If we would say that it was Softengine we might be a little bit biased.

What do you like about Eurovision?
That it brings people together to play music and show a small glimmer of each European country. 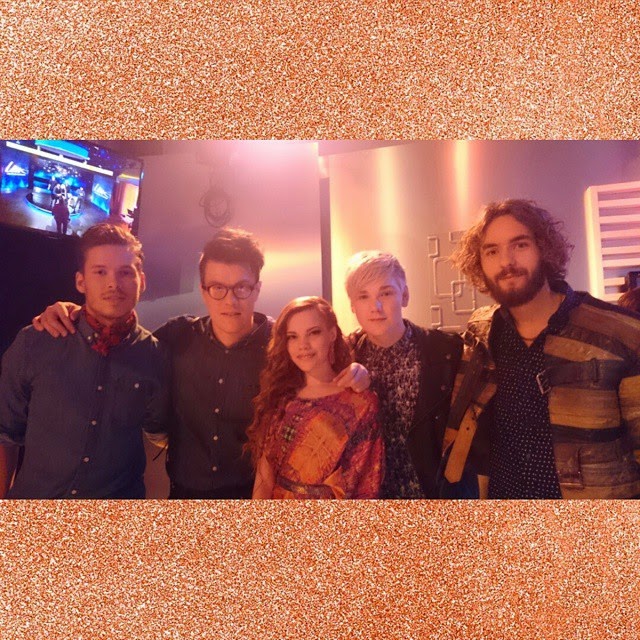 What do you dislike about Eurovision?
Hilda: ”Some performances are so perfected to the last bit that they lose their authenticity. I believe that people are looking for something unique and real. At least I would like to see something raw and fresh in the Eurovision.” Ulla doesn't like over comedic songs in the contest. 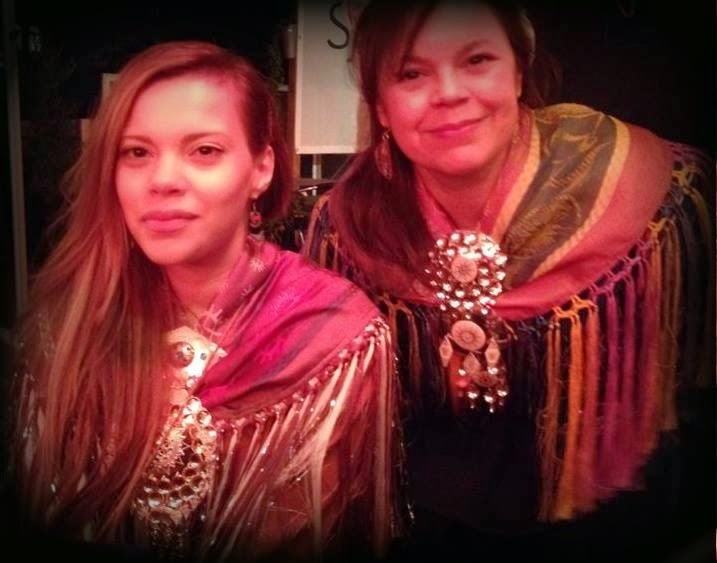 Tell me the first thing that comes to your mind when you hear the word:
Tradition: We value our traditional costumes called gákti - Own culture
Wind: Eagle - Mountain
Nightmare: A bad dream - Pain
Family: Values - Kids and joy
Stage: A tender but strong performance - expression of feelings
Watermelon: Sandy summer beach - Holiday at a warm country
Dreams: We sámi people have a Facebook site where we can share our dreams and others can interpret them - Meaning of dreams 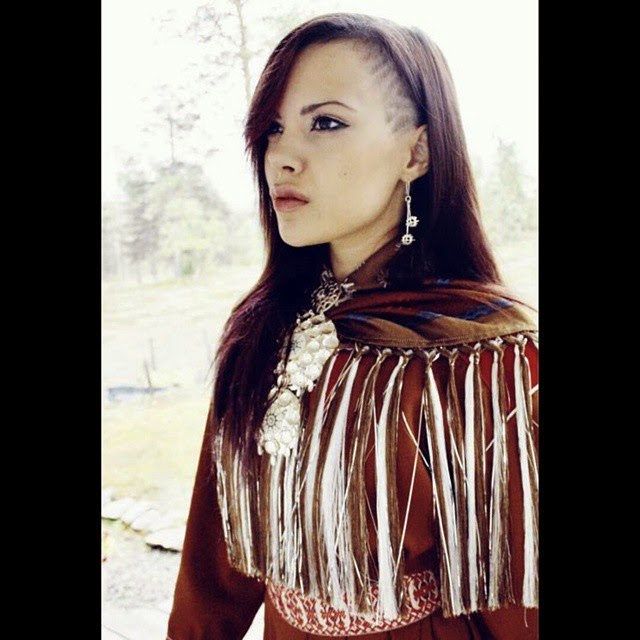 Is there anything you want to say to close the interview?
We send lots of good vibes to everyone from the North. Now we are off to work with our reindeer in the fells. 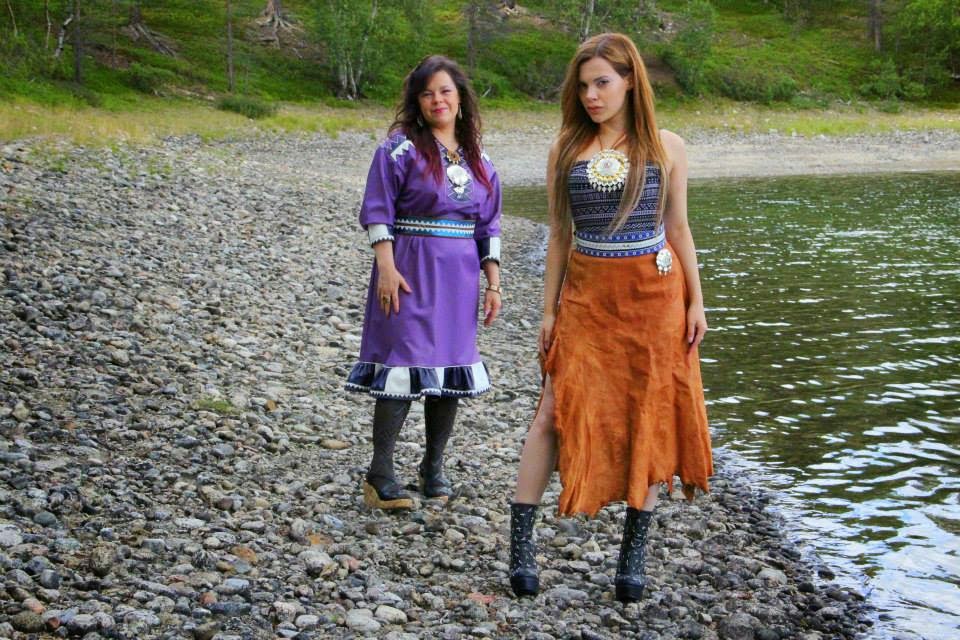 Thanks to Hilda and Ulla for the interview! All the best in UMK!